Was the Fabrication of Wooden Spears and Digging Sticks by Human Ancestors Responsible for the Evolution of Bipedal Locomotion?"

The text of this article is currently under development. When the first draft is completed, it will be uploaded in this space and the draft article will be circulated among my colleagues in anthropology for their review and comment. This draft is intended as a scholarly article addressed to a professional audience.

Until a draft of the scholarly article has been completed, this space will be occupied by

the article abstract and by some of the relevant illustrations.

The evolution of full bipedal locomotion in the hominins is a unique phenomenon among mammals and required a major restructuring of primate gross anatomy, including major musculoskeletal modifications to the skull, spine, pelvis, hind legs, and hind feet, yet the selection pressures sufficiently powerful to account for this restructuring have never been satisfactorily identified. The proliferation of numerous hypotheses to explain the adaptive value of bipedal locomotion suggests that an evolutionary scenario sufficiently compelling to win general acceptance has yet to be formulated. The same can be said for the rapid and ultimately complete disappearance of weapons-grade canine teeth in the hominin clade, a development unique among ground-living primates as well as among the Hominidae in general and which occurred contemporaneously with the evolution of bipedalism. This paper examines the proposition that both the emergence of bipedalism and the simultaneous disappearance of weapons-grade canines were the evolutionary consequences of the fabrication and habitual use of wooden spears and digging sticks by ancestral hominids. 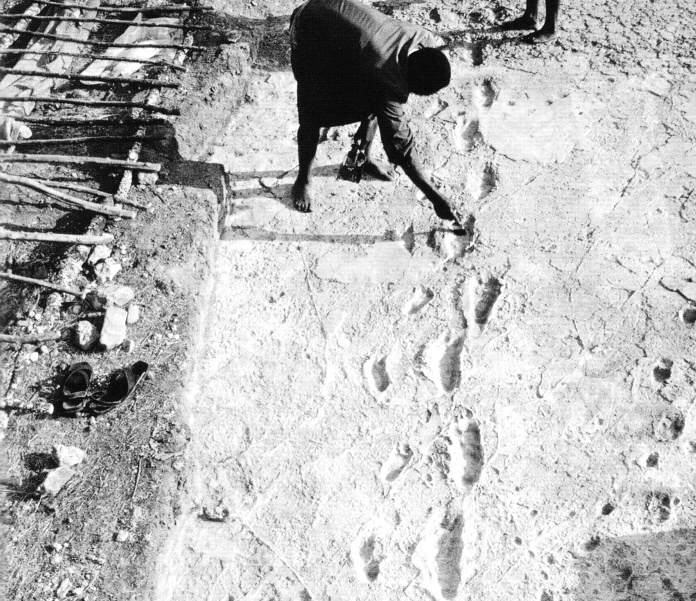 The Laetoli footprints proved that our early hominid ancestors were fully bipedal and walked the earth for millions of years.  Until this discovery, no human footprints more than 100,000 years old had ever been found.  © 2015 John Reader. 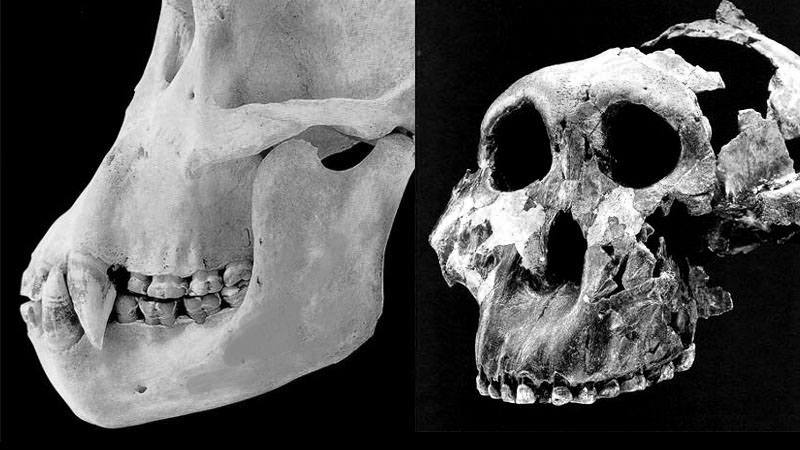 Compare the long, razor-sharp canines of the common chimpanzee (on the left) withthe total absence of sharp or projecting canines in Paranthropus boisei, an early hominid (on the right). How did the early hominids defend themselves without the biological weaponry possessed by all other primates? © 1985, 1996 David L Brill. 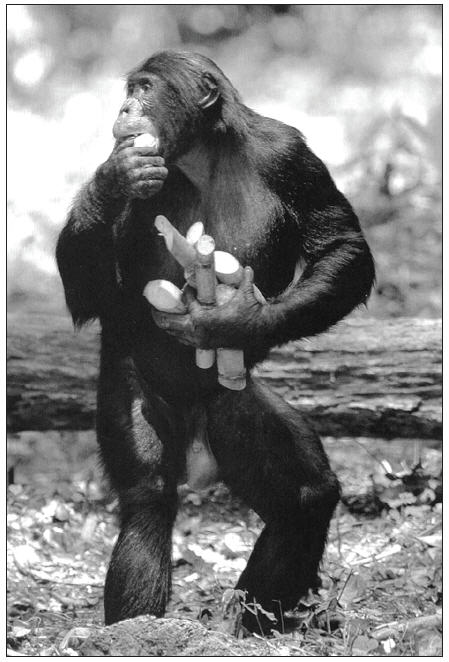 The Bonobo or “Pygmy Chimpanzee,” perhaps our closest relative among non-human primates, has relatively long hind legs that enable it to stand and walk upright, which it typically does when carrying things with its forearms and hands. But its bent knees, long toes, and the opposable “thumbs” on its feet are evidence of its quadripedal locomotion and arboreal way of life. © Frans Lanting/www.lanting.com